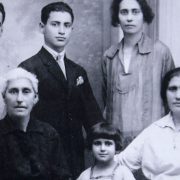 My paternal grandmother, Berjui Marashlian, is missing from the family photograph taken in 1926 to mark her family’s departure from Turkey and Syria to make a new life in São Paulo, Brazil.

Berjui’s mother, Semma, the matriarch, is sitting on a bench in a plain, ill-fitting dress. Her husband is standing behind her in a jacket and tie. Semma’s mother, sister, two teenage sons and four-year-old daughter are with her, but her oldest daughter, Berjui, is not. She had been sent to New York four years earlier for an arranged marriage.

In the photo, Semma looks resigned. She looks tired and I can imagine that she and her husband had decided that, after lives filled with violence, threatened deportations and fear, the move was the only way to preserve the family. I know this, too, because the four-year-old daughter in the photograph, Kanarig, is my great-aunt and we used to spend hours talking about family history.

This past Friday, April 24, commemorated the 100th anniversary of the start of the Armenian genocide, the systematic extermination of Armenians in Ottoman Turkey.

Modern Armenia sits between Turkey and Iran and was part of the Soviet Union from 1922 to 1991. But many Armenians settled in Turkey. It was Abdul Hamid II, the 34th sultan of the Ottoman Empire, who ruled from 1876 to 1908, who first called for the extermination of the Armenians. Massacres occurred in the late 1800s for political, economic, nationalistic and religious reasons (Armenians are Christian).

Deportation route
But it was on April 24 1915 that 250 Armenian clergy, teachers, writers and journalists were arrested in Constantinople (now Istanbul) and deported to a prison in Chankiri, about 320km east, and then forced to walk hundreds of kilometres along a deportation route.

The killing of Armenians continued in several ways. Pogroms were carried out. Able-bodied men were conscripted to provide forced labour. Thousands of people were deported on death marches out of Turkey into the Syrian desert, driven forward by soldiers and deprived of food and water, and subjected to rape, robbery and death.

For Semma and her family, the Turkish pogroms began in 1895, when she was nine years old, in the town of Marash. As my great-aunt tells the story, the Turkish militia came looking especially for young men. They hid their brother Krigor in a dry well so no one would find him. Semma’s baby sister was trampled in the attack and killed. Semma’s mother jumped from a high terrace to escape. As a result of the fall, she sustained injuries that left her disabled and Semma became her lifelong caretaker.

As a result of the attack, the family moved from Marash to Adana, another town in southern Turkey. Twenty-five years later, in 1920, Marash became the site of a battle between the Turks and the French that forced the French to retreat. The Turkish army killed the remaining Armenians in the town.

Krigor went on to write a book, Marash, about the town and its tragedy.

When Semma was pregnant with her third child in April 1909, and living with her husband Luther in Tarsus, there was another massacre of Armenians in Tarsus and Adana.  This took place after the fall of Abdul Hamid II to the Young Turks in 1908 and coincided with a counter-revolution that opposed returning Turkey to constitutional rule.

More than 4 000 Armenian homes were destroyed and an estimated 20 000 people killed. The Young Turks opened an investigation into the carnage but there were no prosecutions.

As a result, Luther went to the United States to see whether he could get established there and call for his family to follow. But, once he arrived in the US, he decided it would not be fair to ask Semma to travel on her own with a newborn baby and two toddlers on a ship for a month, so he returned to Turkey in 1910.

Sheltered
In 1915, the Turkish government decreed that Armenians had to leave Tarsus, so Semma and her family prepared. They stocked dry food. They built a tent they could carry. As it turned out, a Turkish friend sheltered them and they did not join the deportation.

Luther was conscripted and sent to Palestine to work on a road crew for two and a half years. When he returned to Tarsus, they continued to be frightened for their lives so, in 1922, they left for Syria.

Around the time Semma and Luther were leaving Turkey, a young Polish Jew named Raphael Lemkin was observing events. More than a decade later, he drafted a paper about the Ottoman massacres of Armenians. He wrote that those crimes had been largely ignored by most Europeans as an “Eastern” problem.  His paper also drew attention to the rise of Hitler. Lemkin was concerned that, if it could happen to the Armenians, it could happen again. In 1933 he suggested that, if the international community wanted to prevent mass slaughter, they had to unite in a campaign to ban it, but he was not successful in getting people’s attention.

Lemkin was correct that Hitler had learned from the past. In 1939, Hitler made a speech declaring: “Who today still speaks of the massacre of the Armenians?” A week later, the Nazis invaded Poland.

New word coined
When words such as “barbarity” and “vandalism” failed to take Lemkin’s campaign forward, he knew that he needed a new word. According to Samantha Power, the author of A Problem from Hell, a book that charts genocide in the 20th century, in 1944 Lemkin coined a word that was a hybrid that combined the Greek geno, meaning “race” or “tribe”, with the Latin cide, from caedere, meaning “killing”: genocide.

Turkey has spent 100 years denying the massacre of more than a million Armenians and refusing to acknowledge the term genocide. In March this year, Pope Francis was condemned by the Turkish government for calling the killings the first genocide of the 20th century.

While living in Syria, Semma and Luther continued to be concerned for their children’s future. Luther supported the family by buying two Model Ts and driving passengers from Aleppo to Damascus and Baghdad. Semma travelled with him and saw how tense his interactions were with the border guards. She even survived one frightening incident when a guard called for them to stop and shot after them from his horse. She felt the wind of the bullet above her head.

They decided to leave the region permanently for South America. It was no longer easy to get a visa for the US so they decided on Brazil.

Before they left, Semma and her 18-year-old daughter, Berjui, met a woman named Khanoum Kuljian who confided to Semma that her husband had been beheaded in a massacre in Antep, Turkey. That is why she fled to Aleppo and her son fled to New York. She spoke to Semma about whether Berjui would consider moving to the US and marrying her son. Berjui agreed.

She travelled first to Cuba for the marriage, and then was able to get a visa into the US to join her new husband. Semma was sad to see her daughter go but thought it was best for her. This is why Berjui was not in the studio photograph and why her son, my father Robert Luther Kuljian, and I were born in the US.

The studio photo captures my family at a time of great stress and change. Semma lived with her family on a farm in Brazil for 30 years. In the late 1950s she went to the US to visit Berjui and died there in 1959.

I was born in 1962 and grew up in the US, in Watertown outside Boston, with a strong awareness of what my family had survived and a strong sense of Armenian identity. I know that April 24 2015 has great meaning for many Armenian families around the world.

Christa Kuljian is a writing fellow at the Wits Institute for Social and Economic Research and the author of Sanctuary: How an Inner-city Church Spilled onto a Sidewalk (Jacana 2013)