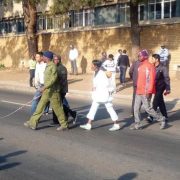 ‘We don’t want you here. We want this area clear,” says a man who hits us with a sjambok on the legs.

It’s before 6am and pitch dark outside the Marabastad Home Affairs office in Pretoria.

The man walks on, through the crowd of people queuing in the veld, giving others the same treatment. “We’ve just been beaten with a whip,” says Reason Machengere from the Solidarity Peace Trust.

We are accompanying Yahaya Kassim, who is applying for an asylum permit. Since the Crown Mines refugee reception centre in Joburg closed earlier this year, Zimbabweans in need of permits have to travel to Marabastad in Pretoria.

Kassim is holding a letter from the Movement for Democratic Change (MDC) and an affidavit that sets out his circumstances.On August 5, Zimbabwe’s Daily News reported that “Kassim, who is MDC youth chairperson for Ward 11 in Mbare…sustained severe facial burns after a group he identified as Zanu-PF youths trailed him to his friend’s home in Mbare”.

Now Kassim is staying at the Central Methodist Church in Joburg and being assisted with medical care and support by the Solidarity Peace Trust, an NGO “committed to human rights, freedom and democracy”.

Ishmael Kauzani of the Zimbabwe Youth Wing also travels with us. I take a picture of the crowds waiting to gain access to the office before there is any light. The flash attracts three sjambok-wielding men.

“Why are you here? Are you with the media? Why are you hiding yourselves?” asks one of the men.

“We aren’t hiding ourselves,” says Reason, “I am from a human rights organisation. I’ve come to assist this man, Yahaya Kassim. What queue should he be in?”

A man whisks Kassim away, hoping perhaps that if he gets him in the queue we will be happy and leave.Another man with a sjambok says: “Three of you came here for one guy to get his papers? This sounds very suspicious to me.”

I ask: “Are you all working for Home Affairs?”

“No, we work for the police,” claims one man with a black leather jacket and a sjambok.

“Why don’t they give you uniforms?” I ask.

“Because we are fighting crime here. There is too much theft and you can’t fight crime in uniform,” he says.

“Because these people don’t listen,” he says.“Home Affairs only wants to see 1 000 people each day,” he says. “We put people in queues of 50 each and line them up near the road (DF Malan Drive).”

The remaining people are in two winding queues of about another 1 000 people, one for men and one for
women.

All of them are applying for or renewing asylum permits, which means that for economic or political reasons, they have been forced to leave Zimbabwe.

There are more than 50 babies in the women’s queue alone.

“I got here at 5am. I don’t have much hope of getting inside today,” says a woman.

A man named Memory says people spend the night at Marabastad, burning tyres and cardboard to keep warm in the bitter cold, because they know this is their only chance to make it into the right queue and into the building.

“These guys use their sjamboks to wake us up. Then they start collecting bribes and putting people who can pay into the first queue.”

At the end of the queue, there’s a tout managing the process – without a sjambok.

Reason tells the tout that he wants to help someone get asylum papers and asks if she can help him get to the front of the queue.She offers to put him up front for R150 – R75 for her and R75 for a police officer to facilitate.

Reason says he’ll get back to her. She gives him her name and phone number.It’s now about 6.20am and the sun is rising behind the Pretoria skyline. Marabastad is only a few blocks from downtown Pretoria.

Later, when the sun is up, you can see the Union Buildings in the distance.

A few of the group of 1 000 at the front are now being led across DF Malan Drive. They are not walking across the street; they are running.The men with sjamboks have told them to run.

The thwack, thwack of the sjambok against legs and buttocks turns my attention to the back of the queue, where another man is at work.

The sign next to the front gate reads: “Together, building a caring, compassionate and responsive Home Affairs.”

We watch as people run across the street and along the perimeter fence of the property: women with babies on their backs, young and old men.

It looks more like an army camp than a place where foreign nationals apply for papers.These are the lucky ones: they managed to get inside the gate.

Hundreds of others will wait outside in the veld for another day or longer.Inside the gates, there is continued commotion. One hears the thwack of the sjambok again and again. People run from one side of the yard to the other.

By now it’s close to 7am.Except for the police van parked on the corner of DF Malan Drive and Struben Street, we haven’t seen anyone involved who is in uniform.

Both Home Affairs and the police will be able to deny that they have anything to do with this harsh treatment.

We wait in the veld across the road from the front gate. A man in green overalls and a dark-blue beanie with a sjambok counts a pile of notes.

He hands some of the money to a woman at the front gate in a blue jersey bearing the name of a security company.

After 8am, not knowing exactly where Kassim is, Reason calls him.

He’s with the group that is sitting on the pavement inside the Home Affairs yard.

Hoping that he will make progress, we go into downtown Pretoria to make photocopies and to get breakfast.

When we come back at 10.20am, there are still hundreds of people waiting in the veld.We walk along Struben Street over to the area where Kassim is sitting.

By now, the sun is high and it’s hot. Reason tries to pass some fruit, two doughnuts and a drink through the fence.

The security guard says: “No, you can’t give him anything.”

To which the guard replies: “They aren’t allowed food.”

Reason retorts: “But they aren’t prisoners.”

About 20 minutes later, security guards tell Kassim and his group of about 200 people that they have to leave the premises.

They will have to come back tomorrow.

A man shows the guards his prosthetic leg, but they don’t budge. “Go,” they say, pointing to the gate.

“Go!” Reason and Ishmael talk through the fence, trying to understand.

“Why are you telling everyone to leave?”

One guard says: “We are understaffed.”

Kassim does not protest.

Not able to speak much English, he has survived multiple traumas – first being burnt on the face then spending 10 days in hospital, leaving his wife and two children behind in Zimbabwe, and now having to navigate South Africa’s Home Affairs department.

Reason decides to speak to the manager of Marabastad Home Affairs. He goes to the front gate and I go with him.

We move away, but Reason tries to continue the conversation through the fence.

Two guards engage in the conversation – the man in the brown Home Affairs shirt and the woman who said that they were understaffed.“We are from a human rights organisation,” says Reason.

“We are helping this man with medical care. We brought him here and he needs assistance.” Eventually, they let Kassim back in at about 11.15am.

About three hours later, Reason calls Kassim to find out about his progress. He is going to have an interview. An hour after that, at 3.30pm, the electricity goes out in the building and he is told to come back the next day to finish the process.After close to 10 hours, Kassim still doesn’t have his asylum papers.

He does have hope, however, that it will be issued the next day. (After going back to Marabastad for another long and difficult day, he does receive an asylum document, but has to renew after a month). Memory, who slept in the veld overnight, isn’t so hopeful.

Without someone arguing his case and with no money to pay a bribe, he has been sliding to the back of the queue for more than a week. “Please help us,” he says, “please tell people what is happening at this place.”

» Kuljian is a freelance writer, a 2010 Ruth First Fellow, and is working on a book about migration and the Central Methodist Church in Joburg

“I walked the streets of Watertown as a child,” Mail and Guardian
Scroll to top